Your contribution to a community

Summer is just around the corner, and people everywhere will be looking forward to go on vacation. According to cruising.org, 30 million passengers will be boarding ships in 2019, a 6% growth over 2018. In fact, the number of passengers cruising grew 20.5% between 2013 and 2018. A cruise ship, is plainly a floating community. Don't believe me? Read through the bulletin boards of Cruise Critic, and amaze at the number of strangers making all sorts of plans with each other, ranging from tours to get-together(s) to pub crawls.  And as a community, a successful trip depends largely on your contribution as a good citizen. 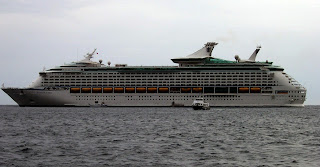 Back in 2008, when I sailed on my first European cruise (a beautiful seven day, round trip out of Barcelona, stopping in the ports serving VilleFranche, Florence and Pisa, Rome, Naples and Sicily) the cruise ship I was on, Royal Caribbean’s Voyager of the Seas, had been the largest ship constructed just 7 years earlier. Back then, they did not build a new mega ship every year. This ship could carry around 3000 passengers (give or take 100; it has been refurbished since). At the time I knew it was not the biggest ship, but I was thrilled to be on one of the biggest. The first ice skating rink at sea along with a Climbing Wall, and an almost length wise promenade; Wait, whaaat? That trip was excellent. Walking down Las Ramblas was not the day before Christmas at a shopping mall. I wondered why European cruises, which I found to be an affordable way to visit different cities, were not the talk of the town. 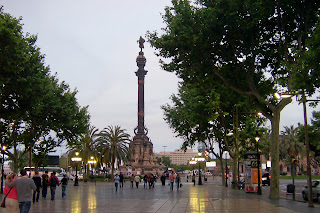 By happenstance, on the flight back home, I found a USA Today article announcing the maiden sailing, later that year, of the biggest ship of the world at the time, the Oasis of the Seas by Royal Caribbean, with capacity of about 6,000 passengers. So big, one of their promenades was called Central Park. An adjacent article mentioned the plans of the different cruise lines to start using different ports in Europe as their base for the summer.

How could you have that many people sharing a certain space was beyond me? Could you fit that many people comfortably in Florence? Would I get a clear picture of the Leaning Tower of Pisa without 100 strangers on my picture? What if there was another ‘mega-ship’ at port the same day? Did I want to share my space with all those bodies?

Well, all this has come to fruition since then. The cost of my vacations since then have gone up a bit, of course, due to the demand. But it still affordable due to the capacity provided. Finding a couple of ‘mega-ships’ in port at the same time is not uncommon. The American public, little by little, has been breaking their own sort of “glass ceiling”. The tough time I have had trying to entice friends to get on one of these cruises compares only to the tough time I have had trying to make them come to the Opera with me. But, the few that had taken my advice, completely love it and have repeated their visits! Cruising, not Opera.

So with many thousands of people now boarding cruise ships at many different ports around the United States, or/and flying off to Europe (or Asia or Australia) to sail on one, how do you enjoy your time on the boat, or your tours around the cities you’ll visit? Will anything ruin your hard earned vacation?

It all begins with you, reading this article. You need to be conscious that just because you are an adult, you do not behave like the ideal one. And there is no twelve steps program for this attitude. Yes! You have rights, but, so do the others. Yes! You are on vacation; and so are the others. Yes! You paid for this; and so did the others. Laws do not need to be written for you to be the George Bailey in town. This is not your personal domain. Within a private entity, it is public. The weakest links in a chain create a bad synergy. So be prepared to do some of the things needed to create a great atmosphere for everyone.

And what are some of these? Well, here are some examples of simply, let us call it, naive behavior, that I recently experienced on the 15 days I just spent on a Transatlantic cruise (NCL’s Epic ). You are an adult, so let me speak to you as such.

Keep it Clean! Do you think noroviruses appear out of thin air? No! Humans with bad hygiene habits are the genesis of it. Yes, you do take a shower, and you wash your hands after going on a bathroom break. But, do you innocently sneeze and then push the elevator button with that hand? That is a daily occurrence everywhere, but when there are 6000 people on the same enclosed space for multiple days, the multiplication factor is exponential. Hunting? Hunting? Will? I witnessed a man sneezing into his bent arm over and over in a two minute time span. The problem was his arm was resting in a handrail, and he was not making a complete effort to cover the entire nose/mouth area. I wish I would have had the guts to capture this on my phone for an instructional video, but that 21st century urge to video other people nowadays is disrespectful, and not very good-citizen like, unless you have no value on your own privacy and dignity. Over the next two minutes at least 10 persons walked down those steps holding the hand rail. A day and a half later, I got a cold, my housekeeping lady had a cold, and there were many people walking around with a cold! You do not need to be Bob Wiley, but, carry a disinfectant hand lotion and use it constantly! Take a one dollar bag of Clorox wipes on your trip and repeatedly clean your door knobs and other items in your room that get constant human touch. “Washy, washy”.

N o tongs? Ask for some! Is there a need to touch someone else’s food? Will you let a stranger reach into your plate? Is there a need to try to grab the hamburger bun with your bare hands, or reach across them with your arm in order to grab something else, contaminating everything that you are ‘barely touching’? Of course no! So stay away from it! You are not home. You are in the community buffet. And please make a nice effort to just grab the tongs where they should be grabbed, not in the middle of it, and lay them back nicely, with just the part that is made for food, touching the food. Placing the entire tool on top of that food defeats the purpose. And if the item happens to fall and touch the common area, ask one of the workers to replace it. Act as if your mother was sitting with you at the dinner table. “Yummy, Yummy”.

Observe everything that is going on around you! Is there a need to block an entire aisle way if you are leisurely walking with friends and family? Or is it neighborly to use your spray tan (not my scent, but thank you... my eyes were going to be shut anyway)? Your 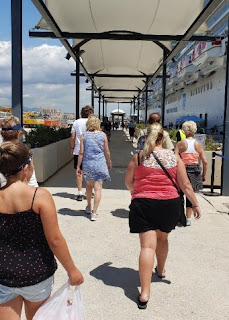 picture is going to be beautiful, but are you going to give me a chance to take mine without you posing for the 10th time, in it? Yes! You are on vacation and so is the people around you! Looking over someone’s shoulder to see what is on the buffet is not a bad thing. Except that the person in front of you doesn’t know you are there and they are about to take a step back with their plate full of dinner in one hand and their wine on the other. Move about as if you were driving. Look around before you stop or before you make any sudden moves. Why is ‘staying on your right’ so hard to follow? During one of my walks about the ship, I encountered a man on a wheelchair coming towards me. To his right, they were slow walking people. So I went further to my right to allow room for everyone to go by. Easy, right? Except that at the same time a couple tried to pass all the mentioned above by using that small available space. All of the sudden I was a quarterback, and I had an entire defensive team coming at me! But I do not want to play the role of a running back either. It is exhausting!

When in Rome…  I witnessed an English speaking lady giving a tongue lashing at a waiter at a street cafe in Cartagena, Spain, because she was waiting for someone to come and show her and her companions to a table, while two other people sat down on the one available outside table. Berating someone over your own ignorance is one of my pet peeves. If you are going to travel the world have a little common knowledge of the customs at these places before you think that your way is the right way, and ruin someone’s day with your arrogance. At least, take a step back, do not hit the gas pedal in a road you are not familiar with. Cafes in Europe, especially street cafes, with no Host/Hostess standing around holding menus, are just places inviting people to sit at their tables. And tours, and Hop on-Hop Off buses are doing their best, after hosting millions of tourists, every week, every season, and every year. If you think you know better with your single visit, well, that is it, you don’t! Because otherwise you would not be in that situation. So please keep your unsolicited negative, naive, loud comments, out of everyone else’s paid vacation. “Happy, Happy”.

A cruise is a great way to see the world in just one sit. A great vacation to share with your friends, your family, with your community! The ship offers everything we need. Nice rooms, good and plenty of food and drinks, plenty of entertainment areas and cities to visit. The citizen makes it all work, making for epic, voyages of the sea.